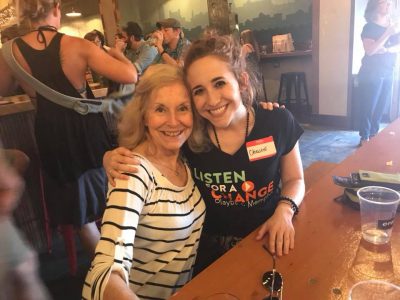 I currently live in Lubbock, TX, studying for my MFA in Theatre Performance & Pedagogy. I have previously lived in Memphis for 9 months.

I volunteered with “Be The Peace” camp this summer, but I’ve been connected with Playback Memphis for about 3 years.

I am a very emotionally expressive person. I was ridiculed a lot for being “too sensitive” or “too much.” This is a place where my expression capabilities are valued as an asset. I am an artist because I found a medium to use my emotional expression and imagination in a productive way. I used to be painfully shy, but theatre has helped me become more confident. I wrote a paper in college about playback theatre because a friend told me it seemed right up my alley. I was simply investigating written and video research for my paper, but I was so fascinated that I looked for ways to connect with organizations. I attended Core Training in Memphis and it was surreal! I met Damilola Apotieri there and made connections with companies around the globe. These connections have kept me involved ever since.

They don’t really know too much about what it is haha. They know it’s significant and important to me because I went all the way to Nigeria to research and perform with Playback Nigeria!

How do you most love to spend your time when you are not Playback-ing?

Listening to TED Radio from NPR and practicing yoga.

I connect with Playback artists every time I travel. I’ve met artists in Boston, France, and Australia. I worked with Damilola’s Playback Nigeria. The community is so intricate and widespread, encompassing a diversity of occupational interests. I love learning from so many different perspectives.

Mindfulness- intentionally practicing gratitude for where I am and who I am with.

I love the Cooper Young area because it’s full of quirky culture and progressive thinking. The LGBTQ Center is where I found a home when I lived in Memphis. And who doesn’t love House of Mews? It’s hilarious!

I’m proud of the adventures I’ve created for myself in my work. I’m proud of taking risks, putting myself out there, & not setting limits on what I can do and where I can go. I know I have a lot of privilege to be able to do these things and I’m forever curious about how to use that privilege wisely. I have a hunger to connect with people other than myself which has stimulated these adventures.

Playback has the capacity to heal conflicted communities by diving into tough conversations and humanizing the “other.” The more we understand each other, or at least attempt to make space and co-exist with others, the more compassionate the world can be. And with compassion comes peace, something our world desperately needs more of.

My dream is to create Playback Birmingham in Birmingham, AL, based on the effective model of Playback Memphis.

I used to struggle with my relationship to be performance because it struck me as being self-absorbed and selfish. But when I met Playback I realized it can be one of the most selfless and empathetic practices. To actively listen, a skill many Americans have lost, to a stranger’s story and to attempt to honor that story with your voice and body…that’s such an intimate act of generosity. I appreciate the opportunity to connect with people who live differently than myself and to learn more about humanity in the process.

At Playback Nigeria, we were performing at a private school assembly. The students had dressed up like someone from a different tribe. They had to research that tribe, make its traditional meal, and wear its traditional clothes. We performed a reflection for the parents in attendance. How did this experience affect them? One woman stood up and passionately described her realization that we cannot treat each other with this division. That we must understand each other and that the tribal differences are insignificant. We performed a chorus based on her story and I was struck by how deeply I, an American woman, could relate to someone’s concerns on another continent completely foreign to my own. The audience cheers when I performed the final moment about destroying separateness and embracing ourselves as humans reminded me why Playback is so powerful. It reminds us that we have more in common than in conflict. And that results in more harmony, collaboration, and progress.

I enjoy transformational fluid sculptures because they succinctly tell a journey from one emotional place to another. And particularly in LGBTQ communities this is a powerful form. I was ashamed before I came out and then I told my sister and I felt free. We get to see a fluid of shame turn into a fluid of freedom. There is power in the change, the transformation. I love when tellers can see this internal emotional journey reflected back to them.

At Core training I was chosen as Teller’s actor for a man who was so different from me. An African-American male who had recently been released from jail. I knew nothing about his experience so I was so nervous. Earlier that week he has even said to me, “You don’t know me. You can’t understand.” But then he CHOSE me to play him! There were other actors who knew him and his experience well. The conductor asked him, “Why did you choose Christie?” He said, “Because in this story I’m being a leader, being very confident, and I think Christie will capture that.” Wow. I felt so out of my element during the performance. How can I play this story truthfully? I was still in early training for playback so I had no idea how to effectively navigate the long story form. But what else can you do but try when someone selects you to embody them in their story? He was pleased with the enactment. But what affected me most was his choice and his reasoning. Our obvious differences (race, gender, class, age, etc.) could melt away.

Glenda because she is delightful.