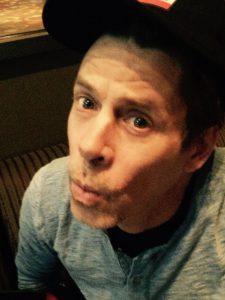 My wife, Virginia introduced me to Playback in NYC.

They are very inspired by the work we do at Playback.

How do you most love to spend your time when you are not Playback-ing?

I’m going back to school this fall to become a nurse.

Being part of such an incredible group of artists and individuals is a real honor.

Watching my boys grow up.

The Grit and the Grind.

I’ve tried to stay as true to myself as possible.

It has the power to transform and heal society.

The sacred act of listening is fully on display. We would have a saner world if more people knew how to listen.

That more children grow up with Playback being a part of their lives.

As a performer the importance it puts on the audience is profound. Everything we are inspired to use in our creative choices as actors is distilled from the audience’s sharing.

There was a story from an older gentleman who had been a young civil rights lawyer in the 60s and had marched in the streets with Dr. King. There was a moment in the reenactment when all the performers including those not performing in the story got on stage, locked hands, and became the crowd of protestors. Usually there are only four performers during a story but there was something about the impulse for the entire ensemble to break out of the ‘Playback’ form that transcended the moment into something very special.

Being the teller’s actor when it is really cookin’ is an out of body experience. You completely lose yourself in the person’s story and feel as if you are being led by some divine force of nature.

Ekpe. He is the shaman of Playback Memphis.