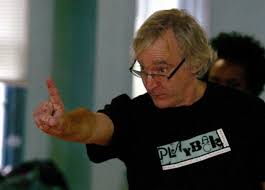 Playback Memphis Professional Ensemble Member, the one and only Bill Baker.

What/who inspired you to be an artist?

I believe all people are artists, and that we are inspired by God to create, that art is the Creator working through us, each in our own way.  My love for theatre began in adolescence, through speech and drama classes and high school theatre productions, when I found joy in making people laugh or moving them emotionally.  It’s the experience of direct audience response, of being in the presence of the audience as you create that makes the theatre so special.

Kimberly has been my wife and creative partner for 20 years.

Zak, my first born, is now 30, and a very talented musician.  His band, Zigadoo Moneyclips, is on the rise.  Joseph and Anna Rose, my children with Kimberly, are growing into their dreams.  Joseph sets his musical goals high, and at 14 demonstrates a precocious command of the guitar and insight into a multitude of musical styles, and Anna Rose, at 11, is determined to be a YouTube star and the first woman in the NBA.

I have been incited to action by the threat to world peace and American democracy that moved into the White House last year. I am inspired by the bravery of young activists like Emma Gonzalez and her classmates from Stoneman Douglas High to use my talents to step up and speak truth to power whenever I can.  I feel that there has never been a time in my lifetime when it was so important to remain vigilant and actively engaged in protecting our freedoms and our rights from the potential abuses of power by the ruthlessly greedy corporate interests that control our country.

First and foremost, I have the privilege of playing with the most talented ensemble of actors I have ever known. I love acting, and for an actor, there can be no greater joy than playing with other actors who can listen and respond the way these folks can. Secondly, it makes me a better therapist and a better human being to practice listening to others the way that Playback calls upon me to do. And finally, Playback brings me closer to God. Our monthly Sunday rehearsals are the best kind of spiritual practice imaginable.

It is theatre at its full potential.  It is the future of this art form that I love.

It can change the world.  And the world needs to change.

At a workshop last month with Hannah Fox, daughter of Jonathan Fox and Jo Salas, the inventors of playback theatre, Hannah stepped into the role of teller and told of some dreams she had had the night before. The embodiment of images from the unconscious of this seasoned and profoundly compassionate Playback practitioner by my dear and talented friends, Joe, Gio, Terric and Holly, was some of the most inspired, dynamic and beautiful theatre I have ever seen.

I couldn’t pick just one!  But I think it would be very cool to have a memorial service where Ekpe played the music and Virginia conducted Playback Memphis to play back the stories people at the service wanted to share about me.  Hopefully, there would be more laughter than tears.