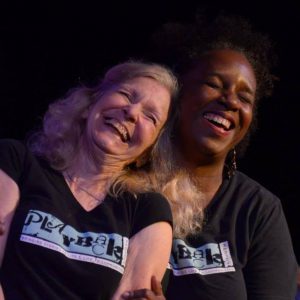 Since the beginning, and we celebrate our 10th anniversary this year!

What/who inspired you to be an artist?

I began acting in 1979 at age 40. I took one class in the theatre department and I knew I had found my dream. I had a pronounced lisp. Rich Rice, the head of the theatre department at Memphis State at that time arranged for me to work with the speech pathology department. I got rid of the lisp. I started working for Playhouse on the Square part time while I was going to school. That year I performed in the movie I was A Zombie for the FBI, and I was either in a play, rehearsing a play, or both until I left for NYC in 1984. I was inspired to try to go to NYC by Dustin Hoffman who was speaking at SETC in 1983 if I am not mistaken.

What/Who inspired you to get involved with Playback?

2 children. My son is a psychologist in Spanish Fort, Alabama. My daughter died of ovarian cancer 5 years ago just short of her 50th birthday. I have seven grandchildren and one great grandchild.

They are big fans.

How do you spend your time when you are not Playback-ing?

I teach a yoga class for seniors on Monday mornings. I have six regulars most of whom have been with me for the last 12 years. I am a bookkeeper and work 40 hours a week between 2 employers, New Ballet Ensemble and Rasberry CRE. Three years ago I formed my own theatre company, Cloud9 Memphis, dedicated to stories of people over 55. We are in rehearsal for our 6th production opening May 11, at the Evergreen Theatre on Poplar. I am an administrative judge for the Ostrander Awards. I saw 42 plays last season.

The state of the world.

What are the perks of being a Playback actor?

I never finish a Playback performance that has not in someway inspired me. Performing with Playback gives me the opportunity to practice my performance skills, hones my ability to be present in the moment and in the company of a fantastic ensemble.

In most of what I do. I turned 79 on March 11. I find joy in the fact that I am physically able to keep up with my schedule and give voice to so much of what I love.

That I have loving, supportive friends all over the country, that I have been able to continue my role in theatre, and that I can continue to support the organizations in Memphis who add so much to the arts in this city.

I believe the organization transforms lives and within those lives ripples form and the change becomes a pond and the pond forms a stream and the stream becomes a river. We are changing Memphis one story at a time.

Because it works. It is life changing. It listens, it brings compassion, it is an active form of mindfulness. We are the meditation on which change begins to form.

To grow and be involved with all Shelby county schools in an anti-bullying program, expand our afterschool outreach in Orange Mound as well as Frayser. For Memphis and Shelby County Government to see the potential of a Playback of 100 or more performers, and a staff to run the social, civic, educational outreach that Playback can contribute so positively to.

The ability to give my artistic best, to engage so many aspects of the Memphis community and to feel that the vision of Jonathan Fox, the founder of Playback Theatre, is alive and well in Memphis.

We were performing for a group of Rhodes Students. A young African American student was telling the story of his struggle when his mother was dying of cancer. He chose me to be the teller’s actor. I lived his story with him that night. I have never been so moved in a performance.

I love pairs. When they work, they are the most interactive, creative and fun. They create a direct conversation with your partner. And they create a definite challenge both physically and mentally.

Does one Playback performance stand out to you?

There are so many. The one where the man, out of the blue, told of his father’s sexual abuse of his sister. The one where the young woman was telling of her family in middle-Tennessee and her struggle with their racial prejudice as she was embracing all races as she entered the University of Memphis. We performed that story with such understanding and nuance. We were brilliant that night. Our overall performance the first time we performed for Victims to Victory. Complete connection with those stories of violence, loss and healing. Laughter, tears, all of it. Listening and playing back those tragic stories. Very early in the history of Playback we performed for NAMI when all participants were involved, caregivers, mental health professionals and patients. The stories of the patients were non-linear and often dream-like. Bill, Joe and I took that journey for one of the patients and it was magical.

I prefer red wine. Actual cocktails it would be a toss-up between a Vodka tonic and a Bloody Mary.

It would have to be a Playback performance. Probably in the form of a chorus. It is a story after all.