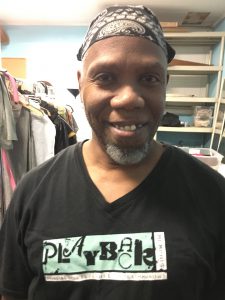 Wayne Smith is one of our very talented ensemble members.

Basically all my life, except during the later part of the 90’s and early part of the 2000’s I lived in Atlanta, GA, Pennsylvania & Ohio teaching at different universities there. I moved back to Memphis in 2008.

In high school (Central High School by the way) I thought I’d be a visual artist or architect. Soon after I was drawn to radio broadcasting, space travel, computers and new music. I was listening to artists like Laurie Anderson, Kate Bush, Gary Newman and Depeche Mode. Even later I was drawn to Modern Dance (I took a class) and I began to notice dance artists such as Bill T. Jones, Michael Clark and performance groups like STOMP! And Pilobolus. By this point I had become a full-fledged dance performance artist fusing dance, spoken word and improvisation. At some point a few years ago Virginia, Playback’s executive director, saw a concert where I was performing and approached me about coming to a Playback Memphis workshop. I eventually showed up.

Interestingly, my family knows of my work with Playback but has not seen much of it. My dance & theatre friends think what I do with Playback is great!

How do you spend your time when you are not Playback-ing?

I teach dance at the University of Memphis. I also teach and perform dance with Project: Motion Dance Collective among other local dance organizations in Memphis. I travel and I am also a BIG Sci-Fi/Fantasy/Adventure fan so I watch TV shows and movies that reflect that.

Flexing and expressing my improvisation (muscles) skills on a regular basis. Doing community work that I feel is important and work that really matters in the community.

Music & Dance. Alone or out with friends.

The simplicity and complexity. The familiarity, my family and southern qualities.

Some of my former students (graduates) that are doing great things in the dance and creative art fields.

I feel it has the potential to change our city, our country, and our world for the better.

What audience would you like to engage through Playback?

Vietnamese and/or Latino immigrant communities that have settled in Memphis over the years. We have yet to do a show exclusively for immigrants.

The work, the lessons, and therapeutic nature.

I played a drug-addicted mother of the teller once. The mother unfortunately was killed tragically in a car wreck not long after she had become sober. For the rest of the story after her death scene I became a spirit watching over the teller (her daughter) being a presence at her graduation from college. It was a very emotional experience and I was so honored to help bring the teller’s story to life.

Fluid sculptures are my favorite because I learned that form first and feel I know it the best.

Seriously? Uh, maybe Ann. We have grown to know each other more and more recently from doing the Be the Peace school based work, and I like how she thinks and prays!