Supporting and training officers using Playback tools gives officer Christopher Street hope for the future. A 16-year MPD veteran and 20-year military career, left this self described ‘big man’ seeking solace and skills to grapple with the pressures of past and present duty. Reluctant at first, the judgement free platform of the Playback model—although not easy —has helped Street unlock hidden dark spots and defeat and overcome bias in his policing. The cultural diversity, intimate relationships with Lifeline to Success program participants, and knowing there are others who struggle with the same barriers and hurdles have made a huge difference for Street as an officer, father and husband: “Playback helped put all of the pieces of the puzzle together.” He feels the interpersonal and communication skills Playback cultivates, have inspired more effective policing and that as officers “we cannot get the community’s trust and respect through force, and we cannot do our job effectively without talking with the community.” Following a hiatus—where he felt the marked absence of the Playback effect— Officer Street is now committed to promoting the workshops for new recruits coming out of the academy. Street says he “needs Playback” and that for many officers it can be a vital support system to help combat the daily drama of policing and PTSD. 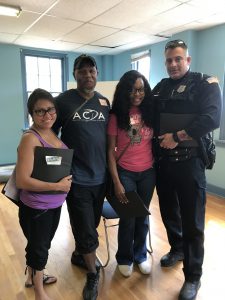